August 31, 2005
Recently, I established a home network using the existing single-run CAT5e cabling running throughout my house. Fortunately, my builder had the foresight to use CAT5e to connect the phones. Ideally, I'd have future-proof bundled cables running through the house, but I didn't want to pull the cable through exisitng construction nor incur the expense. While carrying data and voice on separate twisted pairs within the same cable isn't CAT5e compliant, it worked well for this situation.

Planning
First, I visited many home networking sites and spoke with my networking-savy friends to understand materials needed and how to architect my network. Next, I created a matrix outlining all the drops in the house and what materials were necessary. Afterwards, I surfed the non-user-friendly ;-) Leviton site learning how their products worked together. Finally, I created a simple paper-based diagram detailing the wires and materials.

Materials
I bought all Leviton equipment. My choice stemed from various posts on networking sites and the availability of the materials. It was also reasonably priced and they had everything I needed. I purchased everything though SmartHomeUSA.com because they had the best prices and availability of all materials. They did a nice job except for some delays in drop-shipping my order from Leviton. All told, I spent about $325 to wire data and voice to 8 endpoints.

Preparation
Fortunately, my builder finished in a nice cabinet housing my electrical and security panels. All cable and CAT5e runs terminate to this cabinet. This is what that cabinet looked like before I started: 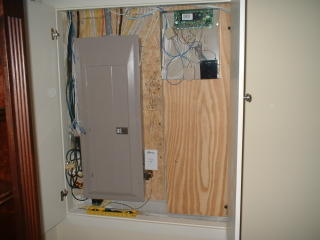 I screwed the wood panel on the right into the foundation and moved the alarm to this wood panel beforehand but forgot to take a picture. Due to the length of the CAT5e runs, you'll see the alarm panel move to the bottom to enable the CAT5e lines to reach the patch panel.

Implementation
First, I mounted the surge protector onto the wood panel. 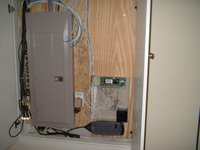 Next, I mounted the patch panel, router, and DSL modem. 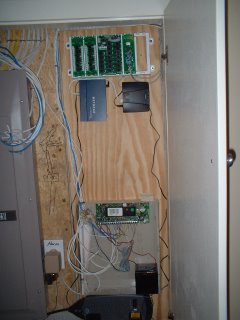 Finally, I wired everything up (this is the finished product). 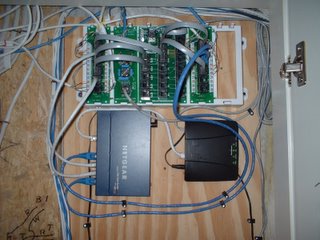 I wanted to keep the Telephone Line Distribution Panels together but the CAT5e runs were a little short and I had to get one panel closer to the cable ends.

Another item of interest here is the non-standard punchdowns. Since I use the blue, white/blue twisted pair for voice and the remaining pairs (3) for data, my CAT5e cable is split between two plugs on my panel. I have the data pairs as tight (the standard calls for <= 1cm from the cable shielding) to the data plug/port as possible with the telephone pair traveling the extra distance. I figured the phone pair would be more forgiving than the data pair.

DSL Filter
One particularly interesting feature I implemented involves the DSL filter. Recently, I switched to SBC DSL using their $14.95/month offer. As a downside, one must install a small dongle-like device on all phone jacks to filter out the DSL signal. Leviton makes a slick device that I installed on my board to filter out the DSL before it is distributed to the individual CAT5e runs. Here's a close-up of the DSL module (look for the solid blue CAT5e cable entering from the top): 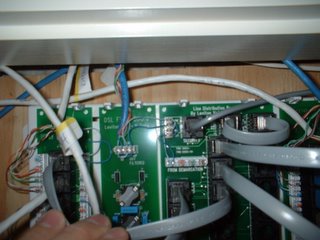 The blue twisted pair (blue and white/blue) line running from demarcation (source phone line running in from the street) is first run through the in/out pairs on the DSL filter. Instead of cutting the wires, one just cuts through the outter shielding exposing around a 2-3mm piece of copper wire. After creating two of these exposures (one for in and one for out), I simply punched the wires down.

Security Override
My house has a built in security system wired into my phone line which will contact an outside monitoring service in the event of an alarm. This feature should have the ability to override the entire system to make the outbound call to the monitoring service. To enable this, the Leviton board sports a security override terminal. Looking at the photo above, just to the right of the DSL filter terminal, there is a second terminal for the security override. I followed the stripping procedure above and punched down the blue and white/blue wires.

To the right of the security override terminal, you can see the RJ45 plug. This plug connects to the alarm itself. Finally, I terminate the demarcation blue and white/blue twisted pair into the terminal marked "FROM DEMARCATION".

Jacks
On the jack side, I simply punched down the data and phone pairs to separate plugs/ports. I tried to remain consistent with the data plug placement on the jack (lower left in the block of four) but I could have labeled it. 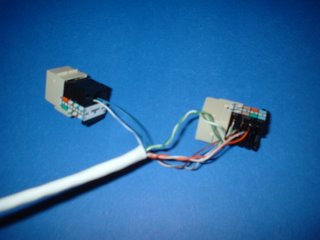 Conclusion
When I finished this project, my wife inquired, "Now why did we need this?" I had to laugh and answer honestly that we didn't really need an internal network but that it did simplify management for me, it's convenient to be able to plug in anywhere in the house, and it was a lot of fun! (except punching down all those tiny wires with the cheap plastic tool...I have big hands) Ok, so it was a geek exercise but I learned a lot and it enables me to expand my network easily. Next, I'm adding a Linux box in the basement with 2 RAID1 mirrored drives to serve as my network storage/backup utility...but that's another write-up!

Anonymous said…
Good job!! i am plannin to do the same ..Hopefully I will be succcesful.

Get Your Team Foundation Server Hate On!

July 16, 2008
[Google ranking skyrockets... ;-)] I'm a big fan of TFS/VSTS. However, there are a good pocket of folks who take issue with the way TFS handles or implements a certain feature. Well this is your chance to vent! I'm planning a presentation around the "Top 10 TFS/VSTS Hates and How to Alleviate Them"...or something along those lines. But I need your help. Post a comment below detailing your dislike. If it's legitimate, I'll highlight it in the presentation and [hopefully] provide an alternative, resolution, or work-around. Thanks in advance! Update 7/19/2008: Version Control and Microsoft
15 comments
Read more

Rollback a Ooops in TFS with TFPT Rollback

June 04, 2009
Rhut roe, Raggie. You just checked in a merge operation affecting 100's of files in TFS against the wrong branch. Ooops. Well, you can simply roll it back, right? Select the folder in Source Control Explorer and...hey, where's the Rollback? Rollback isn't supported in TFS natively. However, it is supported within the Power Tools leveraging the command-line TFPT.exe utility. It's fairly straightforward to revert back to a previous version--with one caveot. First, download and install the Team Foundation Power Tools 2008 on your workstation. Before proceeding, let's create a workspace dedicated to the rollback. To "true up" the workspace, the rollback operation will peform a Get Latest for every file in your current workspace. This can consume hours (and many GB) with a broad workspace mapping. To work around this, I create a temporary workspace targeted at just the area of source I need to roll back. So let's drill down on our scenario... I'm worki
10 comments
Read more

February 06, 2008
I'm building an [automated] build server requiring the .Net 2.0 and 3.0 runtime. Unfortunately, at my client, they leverage a proxy server. The standard .Net 3.0 SP1 framework redist is really just a bootstrapper. Logged in as a local admin on the box, I didn't have the opportunity to authenticate the installation EXE with my domain credentials. So, the install kept timing out. Finally, I found this helpful post from Aaron Ruckman on how to download the very elusive, full framework package. It's here , BTW (x86). I finally get the full installation EXE downloaded to a fileshare, re-run the install and wham--" XPSEPSC: XPS must be installed..." Excuse you? This isn't an XPS ...it's a VM. I found a few MSDN posts here and here outlining the problem. I'm still not clear on what XPSEPSC does (Google yielded little) but you can download it here (x86) . After installing XPSEPSC, the framework installed without issue. Update : Somewhat related, there i
6 comments
Read more